On Friday, Sept. 27, American University Washington College of Law Professor Emeritus Herman Schwartz was recognized for his world-renowned legal legacy during “A Global Lawyer: A Symposium Celebrating the Contributions of Herman Schwartz to the Rule of Law.” The symposium was organized by the Center for Human Rights & Humanitarian Law, directed by Professor Macarena Sáez, and the Program on Law and Government, directed by Professor Fernando Laguarda.

The day-long symposium was followed by a private dinner honoring Professor Schwartz, featuring U.S. Supreme Court Justice Ruth Bader Ginsburg. In her remarks before the crowd of nearly 200 guests, Justice Ginsburg recalled many of the ways Professor Schwartz’s distinguished career has focused attention on human rights, civil liberties, and the rule of the law both in the U.S. and around the world. During the dinner, a congressional citation of merit was presented by Emeritus Professor and Congressman Jamie Raskin (D-Md).

From the United Nations to Helsinki watch, and from Israel and Eastern Europe to the U.S., Schwartz’s illustrious work has been the inspiration for generations of students, academics, and practitioners.

“Herman was foremost among law teachers who appreciate the value of a comparative study of constitutional law,” Justice Ginsburg said. “He contributed importantly to the framing of post-World War II constitutions abroad, and he was particularly hopeful about promoting human rights for all who dwell in the land of Israel. To that end, he established at American University’s Washington College of Law the U.S.-Israel Civil Liberties Law Program. In that program, he superintended the training of scores of Arab and Jewish Israelis to become leaders back home in the advancement of genuinely equal justice. His motto, which has inspired students at AU and elsewhere to follow in his way: ‘You’ve got to keep trying. You’ve got to keep trying.’”

Welcoming attendees to the symposium, Dean Camille Nelson said it was “an honor to be part of this celebration of our dear colleague Professor Herman Schwartz and his formidable and ongoing legacy. It is a testament to that legacy that we have the privilege of welcoming so many distinguished guests to speak on a rich array of absolutely critical topics – topics that Herman has championed his entire career. Professor Schwartz has led the way in championing what matters, which is the motto of this great law school.”

The symposium covered a myriad of issues Schwartz has woven into decades of his legal work, including panels on voting rights, comparative constitutionalism, human rights in Israel, and prison reform. Many of the panelists – scholars, activists, and AUWCL faculty – underscored how Schwartz has helped shaped these respective areas of law.

“I hope my work does a little bit of credit to his amazing legacy, which we all in the advocacy community rely on constantly to this day,” said Deborah LaBelle, director the ACLU’s Juvenile Life Without Parole Initiative.

President Emeritus of the Open Society Foundations Aryeh Neier and AUWCL Dean Emeritus Claudio Grossman discussed the personal and professional impacts Schwartz has made during a luncheon conversation led by Professor Diane Orentlicher.

“You would feel enriched, after talking to Herman,” Grossman said. “For many law professors, their success is measured more in terms of their individual reputations, instead of working together to achieve a common goal. That’s what it is so impressive about the contributions of Herman – his work in the creation of centers and endeavors that would unite people for the purpose of achieving a better world on the basis of legal tradition.” 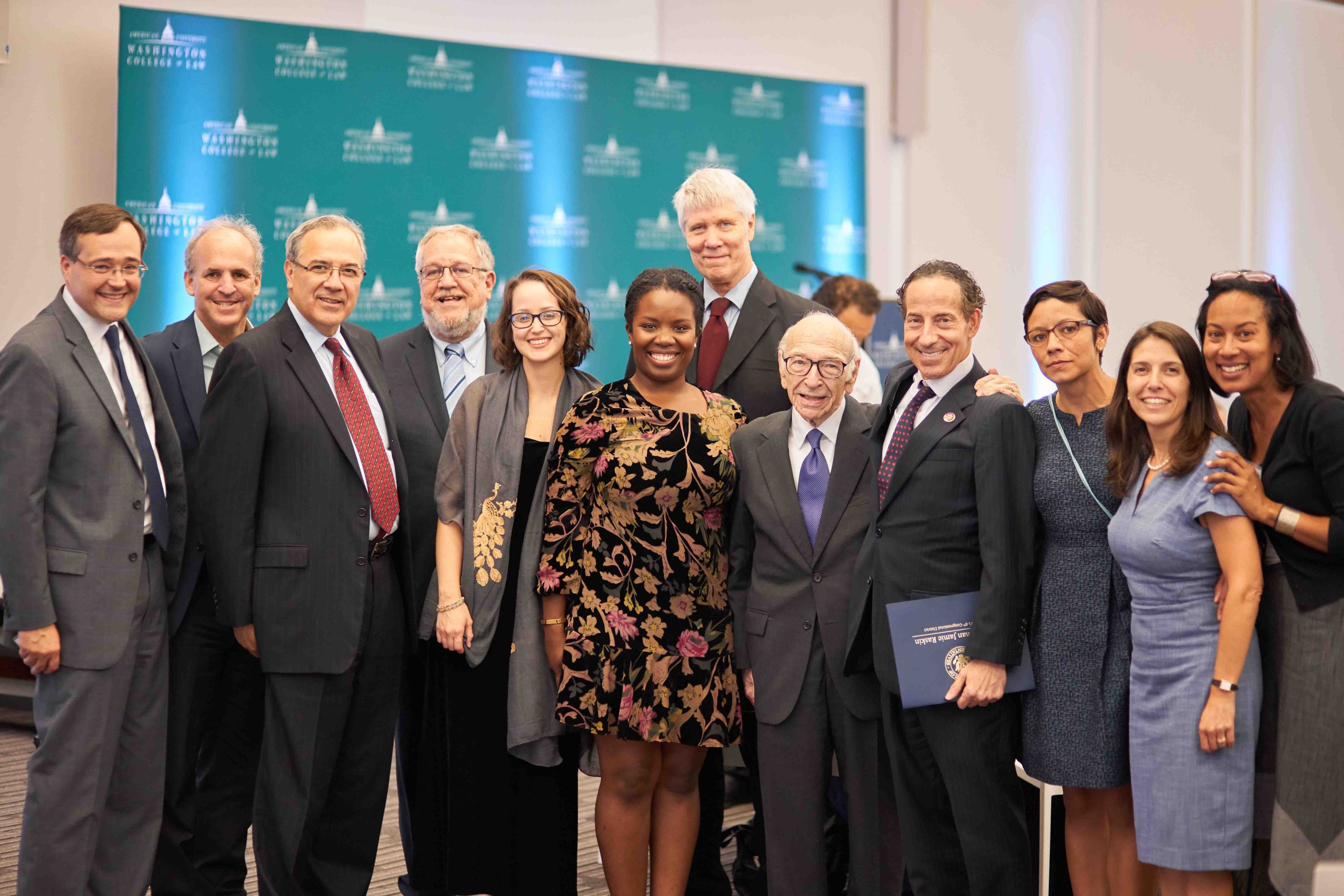 ABOUT THE PROGRAM ON LAW AND GOVERNMENT

AUWCL’s Program on Law and Government is celebrating a quarter century in our nation’s legislative and regulatory hub. The Program offers a broad array of curricular options, experiences, and events, from cutting edge courses taught by expert faculty, to our renowned Marshall-Brennan Constitutional Literacy Project, to symposia and panels featuring our talented alumni. Each opportunity is designed to prepare students for careers at the intersection of public service, law, and domestic policy. Click here for more information.

ABOUT THE CENTER FOR HUMAN RIGHTS & HUMANITARIAN LAW

For nearly 30 years, the Center for Human Rights & Humanitarian Law has worked with students, faculty and the international legal community to provide support for human rights initiatives in the U.S. and around the world through teaching, scholarship and service. The Center engages in exciting innovations in human rights education and advocacy by way of training, complementary education, outreach, workshops and conferences, and research and publications. Click here for more information.