In the fourth and final panel discussion on November 23, experts assessed the progress achieved in obtaining justice for SGBV victims of the Colombian conflict and the challenges that still remain  five years after a peace agreement was signed. 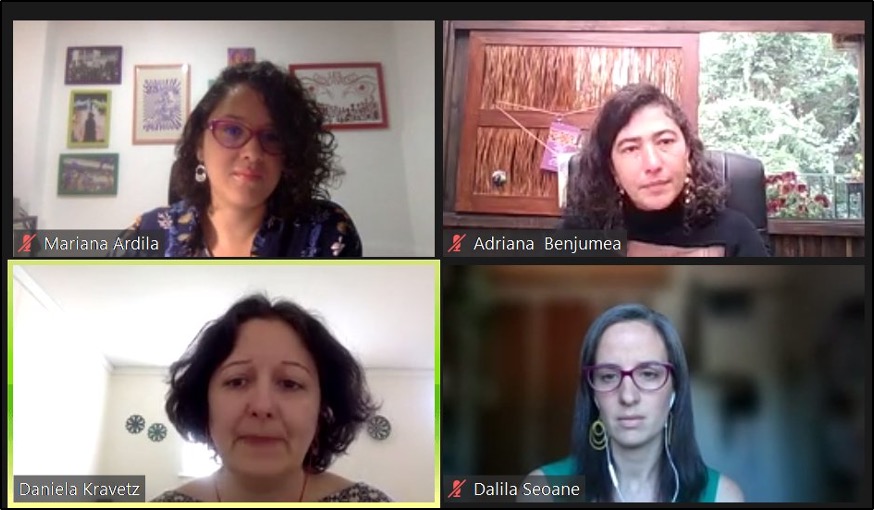 The third panel was held on November 9 and addressed SGBV against indigenous women during the Guatemalan conflict. Participants provided updates on the ongoing cases of Emma Molina Theissen, the Maya Achi women, and the Maya Ixil Genocide case. Moderator Susana SáCouto was joined by legal specialists Lucía Xiloj, Alejandro Rodríguez, and Mynor Melgar.

Learn more about Panel I: SGBV in Peru and Panel II: SGBV in Uruguay.

Moderator Claudia Martín was joined by regional legal experts to analyze the evolution of gender justice a decade after 28 women filed criminal complaints against state agents for rape and torture committed during the women’s illegitimate detention under Uruguay’s military dictatorship.

Learn more about Panel I: SGBV in Peru.

On October 12, WCRO and the Academy convened the first panel in the series to discuss progress and challenges in the ongoing effort to achieve justice for victims of SGBV in Peru, including efforts to bring justice to victims of forced sterilization committed by the state under the Fujimori regime; the prosecution of soldiers for SGBV against indigenous women in the Manta and Vilca communities; the effort to redress SGBV against women in Chumbivilcas, Peru; and the Los Cabitos case addressing SGBV perpetrated by the military.

The series of four panel discussions coincided with the UN campaign 16 Days of Activism against Gender-based Violence and aimed to highlight ongoing impunity enjoyed by perpetrators of SGBV across the region. During each panel discussion, experts and practitioners working in countries across the region discussed the challenges they face in pursuing justice for victims of SGBV, as well as the achievements of recent decades that inspire them to continue fighting.

The U.S. Approach to International Justice in the Biden Administration

On Wednesday, September 30, the WCRO cosponsored a panel on “Reproductive Injustice: Forced Sterilization in ICE Detention” with the Women and the Law Program, Office of Public Interest, Academy on Human Rights and Humanitarian Law, Center for Human Rights and Humanitarian Law, and International Human Rights Law Clinic. The panel focused on the recent whistleblower report that that ICE is subjecting detainees to forced sterilizations and medical neglect at an immigration detention facility in Georgia, and explored possible legal and other advocacy strategies for justice under immigration law, human rights law, and international criminal law. Panelists included WCRO Director Susana SáCouto; Academy Co-Director Claudia Martin; Sarah Owings, Partner at Owings MacNorlin LLC; and Anne Schaufele, Practitioner-in-Residence in the International Human Rights Law Clinic. Nearly 100 people attended the panel, video of which is available here.

The National Prosecution of CRSV in Guatemala and Colombia: Closer to a Victim-Centered Justice?

On Tuesday, September 29, WCRO Director Susana SáCouto participated in the UN Team of Experts on the Rule of Law and Sexual Violence in Conflict’s Digital Dialogue series panel on “The National Prosecution of CRSV in Guatemala and Colombia: Closer to a Victim-Centered Justice?” The panel, moderated by Mona Rishmawi, co-lead entity of the UN Team of Experts Chief of Rule of Law, Equality and Non-Discrimination Branch, brought together academics and experts on the prosecution and investigation of serious crimes in Latin America, with a focus on Colombia and Guatemala. Panelists included Professor SáCouto; attorney Daniela Kravetz, a human rights, accountability, and gender-based violence expert and Special Rapporteur on the situation of human rights in Eritrea; Marta Valiñas, member of the Independent International Fact-Finding Mission on the Bolivarian Republic of Venezuela and a human rights and legal professional specializing on sexual and gender-based crimes; Ana Medina, a member of the Guatemalan civil society organization Mujeres Transformando el Mundo; and Amb. Charlotta Schlyter, Ambassador for Sustainable Development, Permanent Mission of Sweden to the United Nations. Video of the panel is available here, and has already been viewed by over 900 people in the first two days since the discussion.

On Thursday, September 17, Professor Susana SáCouto and the War Crimes Research Office hosted a panel on “Careers in U.S. Criminal and Civil Litigation of Serious Human Rights and Humanitarian Law Violations.” The panel featured WCL alumnae Christian Levesque (JD ’01), Trial Attorney at the U.S. Department of Justice Human Rights and Special Prosecutions Unit; Jennifer Rasmussen (JD ’94), Deputy Director of The Center for Justice and Accountability; and Jennifer Smith (JD ’10), Assistant Legal Advisor at the U.S. Department of Defense Office of Military Commissions; as well as Katherine Gallagher, Senior Staff Attorney at the Center for Constitutional Rights. Panelists discussed their career paths and the incredible work they are doing today pursuing accountability for serious human rights and humanitarian law violations within the U.S. justice system, and fielded questions from students. The panel was very well-attended, with nearly 35 JD, LL.M., and SJD students joining via Zoom, and an additional 25 students via a recording of the panel.

The WCRO will host a second panel on other career paths in the field of international criminal law in November. Please watch our website for further information!